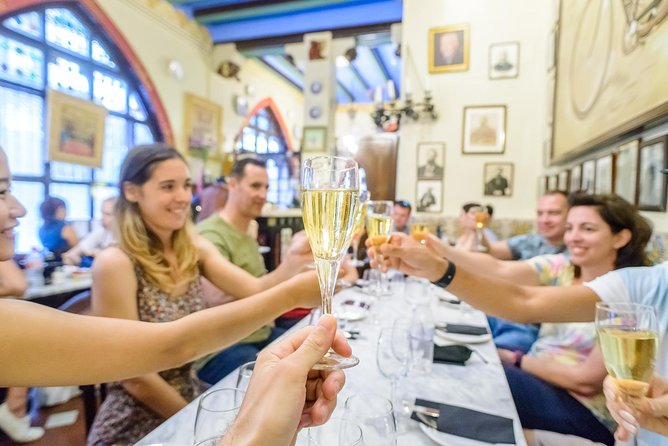 Itinerary
This is a typical itinerary for this productShow More

We are going to see the marvelous neo-Gothic style Cathedral of Barcelona and discover its secret past. We will see the oldest stones of the city, in the remains of the roman walls and aqueducts.

We will be able to enjoy the only piece of art donated to the public done by one of the most prolific painters of all history, Pablo Picasso.

We will unravel the history of the city following the steps of this incredible painter, Pablo Picasso, through its streets and neighborhoods.

This is the oldest part of the city of Barcelona, this onces was the inicial city, in Roman times called Barcino.

El Palau de la Música is an example of our golden days right after the Industrial Revolution, thanks to which, we decided to placed the city walls down, and expanded to transform the city in a metropolitan centre where Modernist artist designed some of the most iconic buildings of the city of Barcelona.

One of the many markets of the city of Barcelona, but one of the few in the Old Town that still keeps the essence of a real local market.

Get lost in this amazing laberint of this tiny street where you will be able to find the true essence of Barcelona.

The bulevard where jousting was held during medieval times. We will tell you who used to come here to see the jousting, you will be able to find out why, in this street, we have a house that many years ago, was cut in half.

We will get lost in a laberint of tiny streets, where the medieval times meet the modern days. Along these streets we will be able to discover that some of the professions from medieval times are still very alive, and that most craft men and women still live and work around this streets.

This marvelous building hides a very well preserve secret. What it used to be a food market, has opened its doors once again to bring us medieval times back to our present days. We will discover the history and the stories of this neighborhood in this stop.

This space, transformed to be used by the people of Barcelona, is one of the most beautiful spots in the city. We will discover what happened to the city of Barcelona after the Industrial revolution arrived. This is the park where the Universal Exposition in 1888 was held.

Inside the marvelous the Ciutadella Park we can find the Parlament of Catalunya. Here we will see the transformation of this space, back in the day was a Military Fort, into this amazing park that everyone loves to spend time in.

Here we will have an awesome view of the skyline of the city from the sea front. We will enjoy the sea breeze on our skin whiles we discover how different this part of the city was not longer than 30 years ago. We will be able to see from the distance: Sagrada Familia, the W Hotel, the Olympic Harbor, the Montjuïc Mountain and the beach of Barcelona.

We will go by what it was, back in the day, one of the most important harbors in the Mediterranean sea. Through this pork many things arrived to the city. This was for the people of Barcelona the doors to the rest of the world.

Discover the most walked street in the city of Barcelona.

The authentic Gothic church that every Barcelonian carries in their hearts.

CityTrip will plant one tree for each trip booking you make.

You can present either a paper or an electronic voucher for this activity.